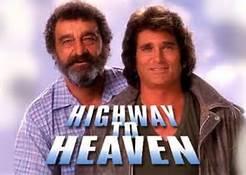 Little House On The

Say a Prayer for Michael 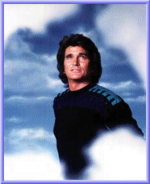 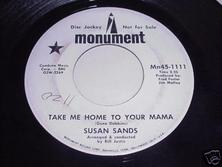 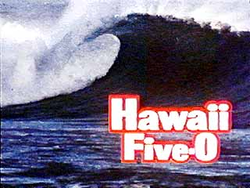 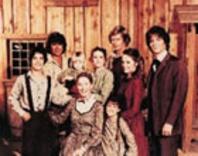 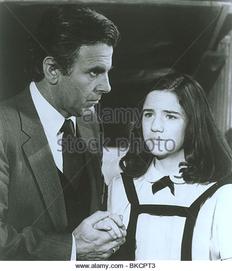 Take Me Home To Your Mama 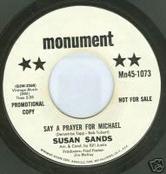 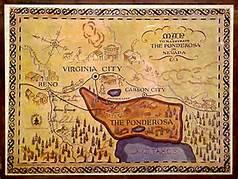 Born to a musically gifted family, Susan Sukman grew up on the West Side of Los Angeles. She attended University High School, then UCLA with major's in Art History and Psychology. Susan's talent as a singer was discovered by Fred Foster, President of Monument Records, who dubbed her Susan Sands and signed her to a contract where she would record four sides for the company.

Her recording of Say A Prayer for Michael appeared on the charts nationwide and Susan's touring increased her popularity. But because of the grueling schedule, she rejected life "on the road" and returned to California. Unsure of her next move, Susan's father, composer Harry Sukman, was aware a new position as secretary/receptionist had become available for the two shows he was working on; NBC's Bonanza and The High Chaparral at Paramount Studios. She interviewed and was hired by Executive Producer David Dortort.

After a year, Milt Hamerman, the show's casting director, offered her a position as his secretary/assistant. By the time The High Chaparral and Bonanza concluded, Susan had worked in the show's casting, production and editorial offices. Experienced in every aspect of the business, Susan left Parmount for Warner Brothers, where she worked casting for hit series Kung Fu, The New Land and other network productions..

Her work with numerous production companies eventually led her back to the casting office at Paramount. There she worked for such shows as Happy Days, Laverne and Shirley, Mannix, and The Odd Couple. Not long after, she received an incredible phone call from Michael Landon. Landon offerred McCray the position of casting director for his new NBC series, Little House on the Prairie. During the nine years casting Little House, Susan’s casting assignments included Hawaii 5-0, Father Murphy, Freestyle (PBS children’s series) and television movies including the acclaimed Diary of Anne Frank, The Five of Me, Rodeo Girl, Killing Stone, The Loneliest Runner, and Mark Twain; Beneath the Laughter for PBS.

Susan cast the feature film Sam’s Son, a semi-biographical story about Michael Landon which was also released as a movie of the week on NBC. Susan then cast the NBC series Highway To Heaven which ran for five years. Susan was then given the opportunity to cast a life long favorite performer, Art Carney in the movie of the week, Where Pigeons Go To Die. That role won Mr. Carney an Emmy nomination. Her work on the two hour movie for television/pilot entitled US starring Michael Landon, was on the CBS schedule to begin a new Landon series for the fall. Sadly, due to the sudden passing of Michael Landon, Susan with partner/producer Kent McCray found themselves producing the acclaimed television movie tribute to their dear friend entitled Memories with Laughter and Love.

Two Bonanza movies of the week for NBC followed. The first starred Oscar winning actor Ben Johnson with co-stars Linda Gray, Dean Stockwell and Richard Roundtree. The second Susan was pleased to cast two major television stars who up to that time, had never been given the opportunity to work on a western - Star Trek’s Leonard Nimoy and Law and Order’s Dennis Farina.

When looking at the shows Susan McCray has cast, you can see why she is credited with being resposible for launching numerous television and film careers. Currently with her partner/husband Kent McCray, Susan is developing new motion picture and television projects under the banner of their production company, Ten-K Productions.